Lots of people have been asking to have a look at the various projects and the state of play of each of them. So with that in mind I will concentrate on the projects that are being done and start with these two views of the 10T10. As can be seen the reframing with the exception of the cab is now complete and the first section of interior panelling and flooring are now in place. On July 1, 2013 it will be 75 years since T499 entered service in Grays and that surely is our target date for completion… 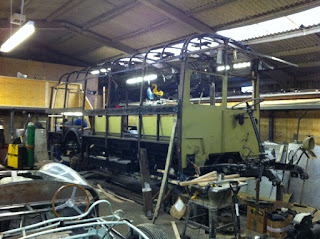 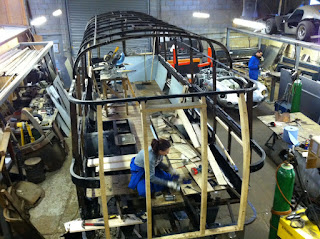 The next full scale project is the Southdown TS7 DUF179 which has been undergoing a major strip down to rectify the rot. The nearside is not in bad shape whereas the offside requires the replacement of all the pillars. Throughout this month we have been stripping this down and just today ‘the tide has turned’ and the new pillars are being cut in readiness to being fitted. The two shots below show the various stages of the strip down. 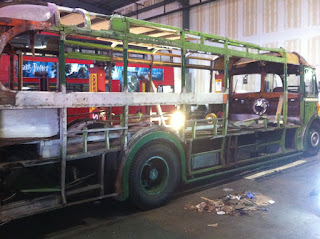 In amongst the rotting pillars on the rear we found this name inscribed into one of them, can anyone shed any light on who J. Pavett was? Is that from its days in preservation or does it date back further? 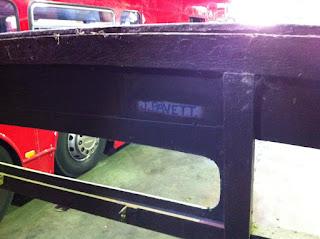 And here are the six pillars being readied to be added to the offside and start seeing us putting back together some of what we have had to strip off. 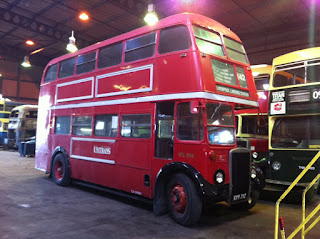 Meanwhile taking shape up at Busworks Blackpool is our RTW335 which is now ever nearing completion and the progress can be followed directly on the RTW335 blog, which can be seen at http://rtw335.blogspot.co.uk/ 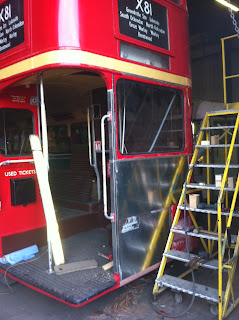 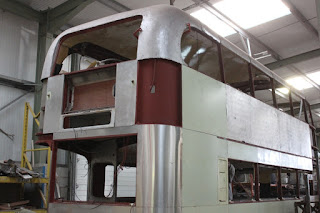 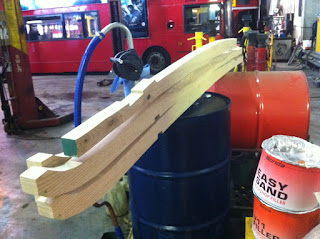 And the reason that the Cub has not featured this month is that we have been working on RTL453 to start getting her all set to take her place in the Wartime London Tour fleet, that starts operating on April 3, have a look at the website if you are wondering what I am talking about www.wartimelondon.com and whilst out having tacho fitted a careless truck driver damaged the rear end… This has needed to be tackled and a new pillar fitted as well as the panels, it has however meant that the vehicle will now need a full repaint and we will also now add signwritten adverts to her for the late 1940s so she will end up looking special, so every cloud and all that… Apologies for not having rotated the photo as I am damned if I can find the rotate button on this new blog feature so will get someone to explain it to me…!! 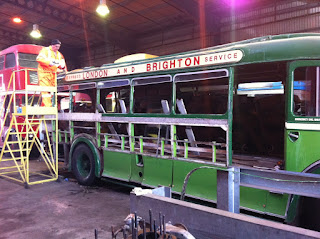 And lastly up is RTL1014 that returned to us after 45 years in California. The vehicle was sold by our Chairman here Peter Newman way back in 1967 and he delivered it to the docks at Southampton for its new owners UniTrans at University College Davis. They have owned, operated and loved the vehicle all that time and due to Californian emission regulations RTL1014 became an outcast from their fleet as she still has her original engine, so we acquired her back. She sailed back on the same shipping line she went out on, came back to the same port, and was collected by myself and Peter, bringing the story full circle. I commented to him as he got out of the cab back at PT ’45 years and you got the bus back, must be a record breaking period for a money back guarantee!’ The intention will be to restore to London 50s condition but preserving her 45 years of US service… looking forward to that one…

So thats it for the month
Cheers for now
Steve
Posted by Helena at 06:09