Well firstly welcome to the new site and indeed the new blog. Excuse me in advance if I make a mess of this post as it has already taken me longer than the restoration of RT8 to actually insert images and rotate them! 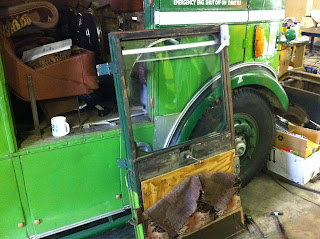 Perhaps not the most exciting of views or jobs but clearly the point of this blog is to show some of the work that goes behind the scenes to put and keep these vehicles on the road. So we decided to take a look at ourpre war Southdown Tiger, which is a lovely vehicle and could be ‘bodged’ to get a season or two more out of her but in reality requires some pretty decent sized reframing to bring her back into the land of the healthy and secure the future. It would seem that this bus having passed througha few hands has put off people tackling the work as clearly one job here is going to lead to another. The shot above shows the emergency door that was already hanging at a slant and with a window that would not open or close was the first thing we decided to look at. As feared the wood was rotten in 75% of it, and where it had been repaired many of the repairs were done in poor quality wood, so we rebuilt it…. 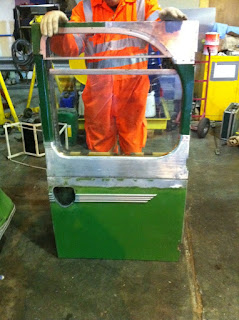 With new framing, the right sized screws (as they always get longer when the rot gets worse and was what was blocking the window from opening) the door is just about done. Now whether this is our next large scale project is still up for debate here but either way when you take something off to inspect it, the very worst thing you can do is not repair and refit it, as things left to one side for ‘later’ generally have a nasty habit of being mislaid and thus causing more work later. Personally I really like the vehicle and can imagine that with a good quality repaint on a decent flat surface the coach could be made to look wonderful. That said I will have to do some homework on Southdown paint colours and liveries as its not my strong point and there are at least five different shades of green that I have counted on her thus far. If anyone out there can help on these  be great to hear from you? 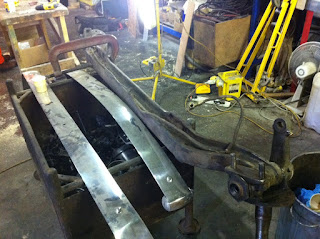 And off site the 10T10 progresses really well but we still tackle many parts of it from here. This is the front axle (lying next to the Cubs new bumpers) that has required a lot of work on it to free it up, fit new bushes and bring it up to PSV standard. It is now complete and ready to go back and be reunited with the bus itself which progresses well and I will update on next month. The target date for it being ready is July next year which would mark the 75th aniversary of it entering service at nearby Grays depot, which is surely an aniversary we just cannot miss… or will we? 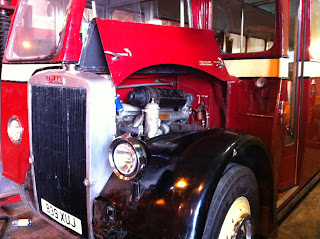 Lastly, is another one thats come back to life. Our ex JMT Tiger had an engine failure last year. For some time she sat and waited whilst we looked to find a replacement which was duly delivered and fitted, and runs like a dream. Whilst we had the bus in bits we have taken the opportunity to reline the clutch as whilst not worn to its limits it was getting low and with whats shaping up from the bookings thus far to be a busy season as well as some of the buses being used on the new London Wartime Tour, have a look at www.wartimelondon.com it was prudent to tackle the job now we felt.
The Cub now is also back with us having been away for some further work on its engine, which in due course has shown up some other minor system problems associated from it now running under its own power, but we are getting ever nearer with that, and now that I think I am mastering this new format, I will endeavour to do a more detailed update next month.
Cheers for now
Steve
Posted by Helena at 06:00