Its been a really bus period for bookings, hires and general work for the vintage fleet. Some is probably down to the fact that a lot of people seem to have held off getting married during the Olympics and chosen Sept as the month to tie the knot.
On top of that we have been catching up with some long term off the roads, such as RT624 which now has a replacement reconditioned engine fitted, as has RMC1513 which can be seen in the final stages before being road tested, which was successfully completed earlier this week. The vehicle now needs repainting and some interior TLC to bring it up to fleet standard. 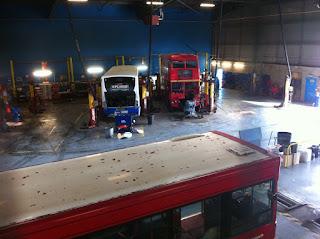 Meanwhile another long term off the road that is about to reappear is RMA50 which had the  B frame requiring a great deal of work on it and means the rear axle and diff all need to be removed whilst the work is undertaken as can be seen from the rather forlorn looking vehicle thus marooned in the air. 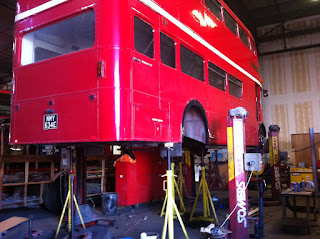 However, the work has been completed after some weeks now, the units all reassembled and finally this week she has been put back together and will be road tested either today or perhaps next week now. 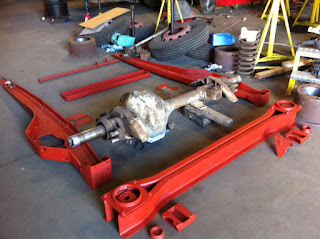 Meanwhile of the larger projects both make progress albeit with the Cub in a very ‘one step forwards two back kind of way. That said we are now finishing off all the remaining body work issues, fitting mirrors, wipers, wiring in headlights etc. That will leave us with two outstanding issues mechanically, which is a now a minor leak and excessive smoke, but to be able to test the vehicle we need to be able to drive it now further distances than around the yard, hence the push now to complete it so it can be passed over to the mechanics and to enable it to clear its final few hurdles, but as can be seen from below, its certainly looking like a Cub now.

Which brings us onto T499 which is starting to not only take shape but also colour! As can be seen some of the interior rexine is in as it has to be fitted before the luggage racks are fitted. Originally these had a diamond pattern embossed/stitched into the ceiling rexines, something we have faithfully recreated by studying the original pictures and working out how many diamonds match up again known sized parts, such as the air intakes, so we could recreate the exact pattern. The visual is starting to prove that this extra time on detail is paying dividends in my opinion 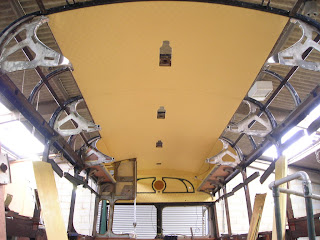 We also now have another RML on the fleet, 2588 but I will add a bit more about her in my next update
Cheers
Steve