So we move on into May and despite the drought warnings it seems to be colder wandering about than it was in January. However, this time of year does mean the rally season starts and one of the earliest transport events was at Carlton Colville, where RTL453 operated having just received its new engine and gearbox and having been repainted only days before. As soon as it arrived back though it was made ready for signwriting for period adverts and I thought a shot of it with first layers on would be interesting without giving to much away! 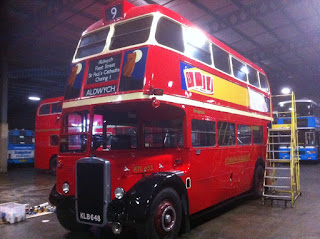 Meanwhile the Southdown TS7 continues to take shape with the reframing of the offside largely complete and the rear end now being tackled. Fortunately the nearside is much better and only the door area and one pillar need to be replaced on this side. Hopefully therefore the reframing of the cab can start in earnest in June, following Tony’s (whose baby this is) holiday. We have also worked out how to reinstate the long since closed shut sliding sun roof and thanks to some of the original parts being returned to us by a previous owner, for which we are very grateful for. As to when it will be ready… I dont usually stick my neck out but I think we are going to be very close come the end of the year, lets hope I havent now jinxed it. 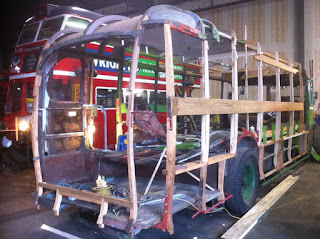 The other major project that inches ever closer to completion and really has been the problem child of bus restorations is the Cub that Pete has been working on now for longer than he cares to remember. The wings have needed to be adjusted to ensure a good fit and thus allow us to put the bonnet area together, once this is completed we can finally start on some proper road tests. All that though however was reliant on finding a front wheel, which took some time and I am delighted to say eventually ended in a successful conclusion and is now fitted, which is a huge relief as that was starting to look like it would be the major bottleneck. Next on is final adjustments and then its time to fit the headlights. 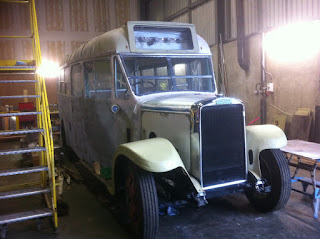 So that’s the progress on the major projects this month which I think overall has been really good. Added to these is obviously T499 which has progressed really well this month and RTW335 and MD60 which have also made progress. Lets hope 2012 sees some of these back on the road after extensive restorations and increases the number of roadworthy types of our vehicle heritage that can be seen out and abou
Cheers for now
Steve