Into Autumn- The countdown to running day starts here....

Apologies for the delay in updating but the summer has been a very busy one with more rail, private hire and vintage work than we had ever had. On some days there was up to 25 vintage vehicles out on a single day which was record breaking stuff for our fleet.

However we now start the work in earnest of getting ready for our annual running day this year taking place on December 7. It is always our intention to try and debut at least one vehicle on our running day although last year I think we ended up with around five not seen before with us, well this year we are attempting to put six completed projects back on the road but the planning to finish, re-certify, paint, check drivers out on, make blinds for etc etc mean that to make it all happen takes months of planning behind the scenes before hand for it to all come together. I know some people like the surprise so I won't list the six here or indeed update all their progress so will in this update stick to two major projects that are inching their way towards completion. First up is DUF179, a 1937 Harrington bodied Leyland TS7 originally new to Southdown. 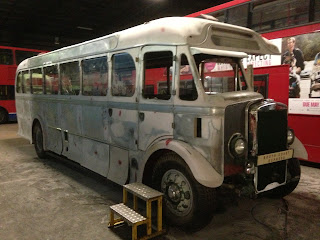 As can be seen massive strides have been made with 95% of the body work complete, the radiator and water system all back in, including the long since disconnected heating system being repaired. And of course whilst doing the heating we also reinstated the air conditioning... In this case its a sliding roof controlled by way of a manually operated handle in the cab. Clearly for years this has been sealed closed but is now a wonderful feature and when back out in the daylight I will take some shots of it as we are trying to stop anymore dust settling inside at the moment and thus a photo of a closed roof would not be of great interest I suspect. 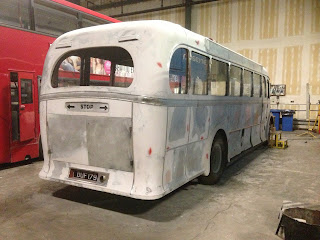 The rear end is also now largely complete. We have had to reframe most of the offside and rear as its days used for towing trolley buses about had pulled and warped pillars in all kinds of ways, in fact the framework of the rear seat was in a terrible condition and warped to the point of near collapse but all is well again now. The rear lights used to have a much later add on of caravan type lights and we have restored back the style that is shown on some of the post war drawings we were supplied with, which added to some modern lights will certainly make for a safe, bright and yet traditional looking rear end. All things being equal she should be going for paint in early October and will allow us to finish the wiring and reinstate most of the interior. 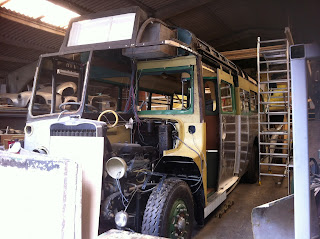 Meanwhile one of the 'star' vehicles we have coming along is the 10T10. I drove it on a maiden short journey in early August on a private estate where we were checking gears were all good. After fixing the issue with second we were able to test a little more each circuit and she performed very well. That said with no cab seat and no foot brake it was not the most comfortable drive I have ever done but probably one of the most satisfying. New brake cylinders have gone on, and a problem with the master cylinder put us back a bit but a reconditioned one has now gone on, the cab seat is due to go back next week so I am hopeful the next test drive will be a little more orthodox! 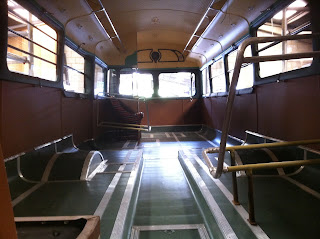 For me though the interior of the T is just superb... There are so many tiny details we have uncovered along the way that we have faithfully recreated that the appearance now really is like stepping back in time to when these were delivered. For example the ceiling is rexine covered, but not just plain rexine it was hand stitched with a diamond pattern that we have recreated and matched. The floor was green vinyl, the luggage racks again covered in rexine, and even the window rubber was made in green so that flaking paint was not an ugly later problem had they just painted the black window rubber green, all of these details we have recreated and I think the final effect when the seats, covered in the correct fabric go in next month. 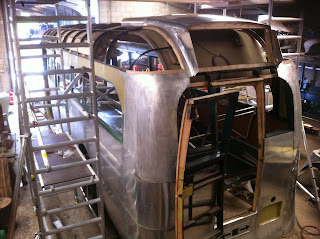 So attention has now been turned towards the roof. The panels are now all going back in, the destination gear is being fitted, the emergency exit is back in and the distinctive rear end is really taking shape. The only problem is time here, its really tight for running day and the worst case may be that it just takes a display role in December as painting to the livery and standard we want to achieve may be beyond the timescales we have left... Although I have one cunning plan that may see us do something completely different...

I am also told now that comments have been restored to these blogs but have no idea if indeed that is the case until I press the submit button, if so please feel free to post any questions, ideas or suggestions or anything you would like to see added to future updates so I can try to put up what people would be interested in seeing.

Cheers for now
Steve
Posted by Helena at 07:29