Cub goes back to work!

For the first time since the early 1950's, Leyland Cub C4 was on revenue-earning duty in London this time at the Chelsea Flower Show in May.

Show sponsors, M&G Investments, were looking for something eye-catching as a principal attraction for the show and they chose C4 to meet that need.

The bus windows were vinyl-wrapped with M&G publicity and the bus was to be seen around the show throughout the week.

On the first day, C4 was inside the grounds of the Royal Hospital for Press Day and really did cause a stir. Many visitors were impressed with the vehicle and expressed their delight at seeing her. Many others came aboard to admire the quality of restoration and some to reminisce. One gentleman recalled travelling to school on a Cub. His mother took him to school at the age of 5 for the first day and from then onwards, he was expected to manage the journey on his own! As C4 operated in the southern Country Area of London Transport, there is a strong possibility that he actually travelled on our bus. He alighted completely entranced and its events such as these that always remind us that personal stories are one of the reasons the vehicles are so special.

For the remainder of the week, C4 made occasional journeys into the City of London to provide transport for M&G staff and then spent most of the remaining time travelling around the Sloane Square area providing mobile publicity for the show or parked up near the Royal Hospital to allow the public to admire the vehicle. 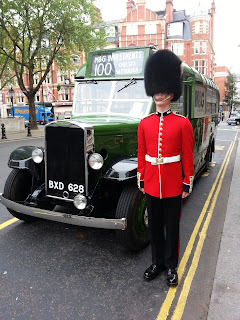 So many appreciative comments were passed that it was impossible to keep count and at one point she was rather closely 'guarded'! 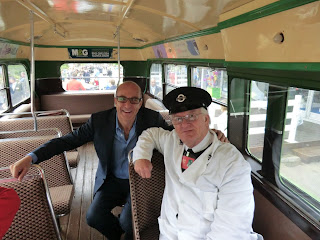 Whilst the interior was seen as being hypnotic...